Source: The Book of the Labrador Retriever, by Anna Katherine Nicholas 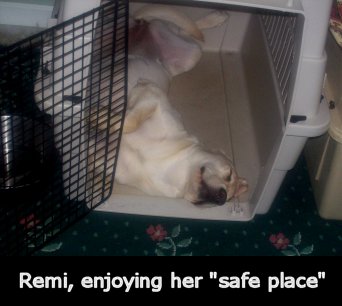 We advocate crate training for your Labrador Retriever. Crates should be used to keep your Labrador puppy in during times that you are away from home, sleeping, or preoccupied with something which precludes you from being able to completely supervise your new puppy. Initially some people react with believing that locking up your new puppy is cruel. We believe that it is not. Crating your Labrador puppy allows you to go about your required business knowing that your beautiful new Lab puppy is safe and sound until you can once again return to him/her. Imagine being out, coming home, and finding that your puppy has broken/chewed something valuable or close to your heart, eaten something and is now either poisoned, has a bowel blockage, or is dead from something lodging in it's throat. Now imagine, coming home, your Labrador puppy is in his/her crate, the house is just as you left it, puppy is healthy, and both of you are thrilled to see one another. Personally, we would pick the crate.

Crate training is not only useful for keeping your Labrador and your home safe, crate training your Labrador Retriever aids in house training (see below) and in training against unwanted chewing. It is also the best way to keep your new Labrador safe while traveling in a vehicle, and it is a wonderful way to keep your puppy quiet following spay and neuter surgery (Labrador Retrievers like running and playing long before the vet recommends they run and play following surgery). As well, the crate can become a private place for your Labrador where there are children involved, and it is quite simple to instill the rule that when puppy is in his/her crate, the puppy is left alone. This is valuable in giving young Labrador Retriever pups the much needed rest time, and teaches the youngsters to respect this time.

How does crate training help in training against unwanted chewing? When your Labrador puppy is in the crate, it cannot chew on things it shouldn't. Labrador Retriever puppies chew for a lot of reasons; boredom, teething, exploring, or just because. If your puppy is properly supervised, you can teach it what is allowable chewing (i.e. their own toys) and what is contraband chewing (your family heirloom, the poisonous houseplant, etc.) When your Labrador puppy chews, it is rewarded. It either is no longer bored, it's teething pains feel better, it's having fun. This sets up the puppy that, as it grows up, whenever it feels uncomfortable such as when you've gone out the door and it's a little anxious, or when it is bored, it will chew whatever it finds. Thus, you have an adult Labrador Retriever that will chew. If, however, through training and proper supervision, your Labrador Retriever has learned what it is allowed to chew, then when it needs to satisfy the urge, you will have a non-destructive Labrador who understands what his/her toys are for. We again, choose crate training.

The bottom line is, Labradors don't mind their crates. Their crate becomes their little space where they can rest and spend time comfortably.

How to Crate Train A Labrador Retriever ...

When you first bring your Labrador Retriever puppy home you should already have your crate. Set it up in an area central to the family, but not in heavy traffic areas of your home. We recommend in your kitchen near a door leading to a fenced yard where puppy will go out to relieve him/herself. It helps to leave the crate in one location (Labrador Retrievers are dogs and dogs are creatures of habit and learn to rely on these things). The day you get your new Labrador puppy home let it explore the crate. Put a doggy biscuit and/or an interesting toy into the crate. Let the pup wander in and out of the crate (you may have to coerce it to go in a couple of times) at first leaving the door open. Several times through the day, take your puppy back to where the crate is and repeat the toy/cookie routine. Praise your puppy (Labrador Retrievers thrive on praise) for going into the crate in a quiet, happy voice. Praise your Labrador puppy for playing in the crate. After your pup has entered the crate a few times, put a brand new exciting toy into the crate, lure your pup in and close the door. Just for a few minutes. If the puppy whines you can talk to him/her, put your fingers through the door and touch him/her, but do not take the pup out until s/he settles. Then give lots of praise and open the door.

Patience is the key to the effective crate training of your new Labrador Retriever puppy !!!.

Wire or plastic? What size crate? Blankets? Alarm clock? What to put in the crate ...

With respect to bedding, we recommend putting an old towel in the crate for puppy. Some Lab pups chew their bedding and an old towel is worth less than the new $55.00 designer version of a pet bed. More often than not Labrador pups will move the towel aside and lay on the bottom of the crate -- it is cooler for them. We do not recommend alarm clocks ticking or hot water bottles. To help your new puppy feel a little more secure we recommend an old stuffed teddy bear which has any button eyes and nose removed and restitched securely.
Do not leave food and water in the crate. You can leave the pup with a safe toy or two (nylabone, kong, rope toy) and perhaps a doggy biscuit. Do not put your Labrador Retriever in the crate wearing a collar, or put rawhide, pig's ears or squeaky toys. Remember, you want them to be safe.

For how many hours and until what age are Labrador Retrievers crated ...

When you first get your new Labrador puppy s/he will be 8-10 weeks of age. At this age it is advisable to have your pup in the crate for no longer than about three hours before letting him/her out to relieve themselves, have a little play and a cuddle. Once your Labrador pup reaches 12-16 weeks, about four hours is the rule. It is not advisable to leave your Labrador in it's crate for longer than 5-6 hours regardless of age once your get past the 16 week mark. Should you find you must leave your pup for longer than this, then be kind and have a neighbor or relative come in and let your puppy out and spend a little time with him/her.

With respect to what age you will need to crate your Labrador Retriever, there is no exact age. Each Labrador is different. I personally would crate until your Labrador Retriever is one year old. At this time you can "test" the dog. Leave him out for very short periods of time when you are preoccupied. Watch what he does. Then increase the time spent out until he stays out while you are sleeping. If he shows himself trustworthy, then you can begin to "test" him when you go out. Only ten minutes at first. Then an hour, then two or three. Do not rush in getting your Labrador "crate-free" as bad habits can still be formed.