Shown below are unsolicited photos and testimonials that we have received from our many satisfied Labrador Retriever puppy buyers over the years. We're always adding pictures and comments from previous buyers, so be sure to bookmark this page and drop by often!

Rex & Theresa,
Thanks so much again.  I'm sure it was a hard thing for you to do.  Wyatt is doing really well.  He seems to be very much at home so far.  Mary (chocolate female)  seems to be playing hard to get, but warming up slowly.   I think Sally is old enough that she just really doesn't care. : )  The girls are giving him lots of attention.
Chris, Karen, Jenna, and Lindsey 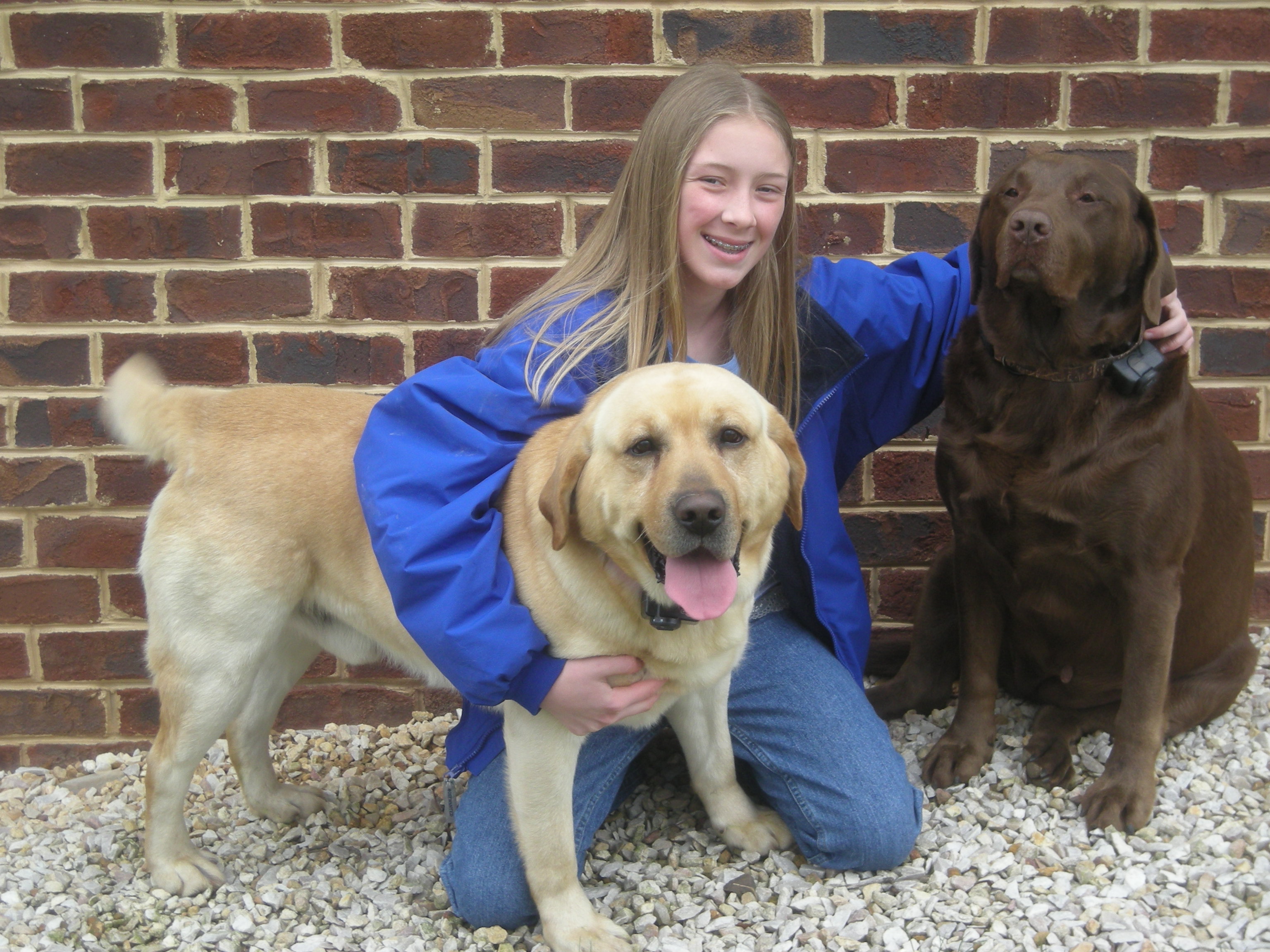 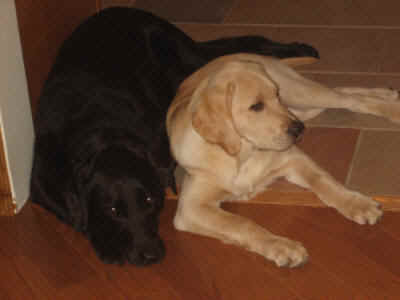 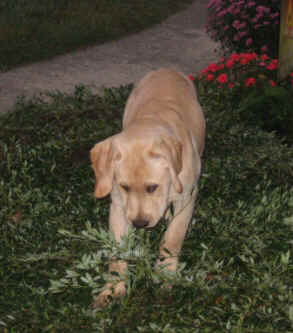 Just wanted to send you some pictures of Walter. He is the most loyal, lovable and listening lab we have ever owned. He loves to be a part of everything and would be just as happy to watch Zoe fetch her balls as he can be a bit lazy! His favorite things are small logs and doing whatever Madison asks of him. We have been blessed with all of our animals because they love each other.
I hope you and your family have a Blessed Christmas and A Happy New Year. 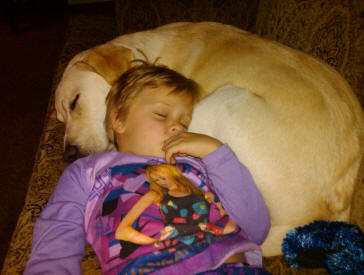 Hi Theresa and Rex- August 2009
Here is a photo of our daughter Lucy and her "puppy" Daisy Jane. We brought Daisy home last January and cannot sing her praises enough. She is the very best dog we have ever met. Loving, kind, intuitive and gentle.
Thanks a million. We always recommend Klondike Labs. You are one in a million!!!!
Blessings to you,
Matt, Linda, Kimmie, Kelly, Ryan and Lucy Sanford. 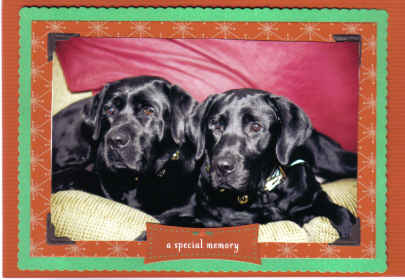 This is a picture of Emma and Abby.  Abby is one of Maggie and Hershey's pups.

She is loved by her big sister Emma and John and Robin Roon.

We breed quality along with temperament. 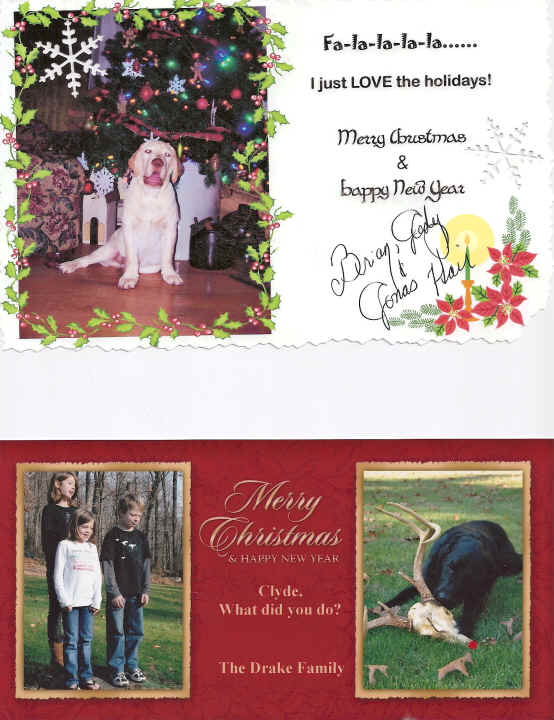 These pictures are Christmas 2009.  The white pup is a Hershey and Kami pup and his name is Jonas.

Clyde is a Hershey and Maggie pup.  Looks like he may be in trouble.

Ruger is owned and loved by Don Sheffer and girl friend Briana of Altoona, Pa. 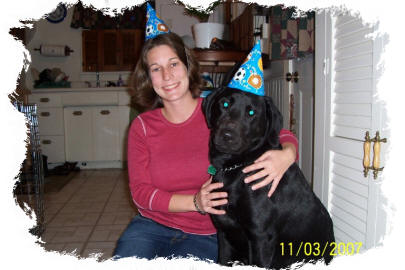 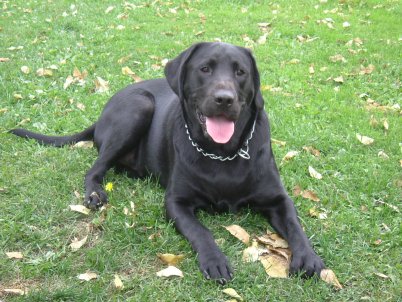 Remi is owned and loved by the Chass , Karen and Tanner Johnson family of Fayetteville, Pa

Clyde is owned and adored by the Kristie and Ronald Drake family of New Jersey. 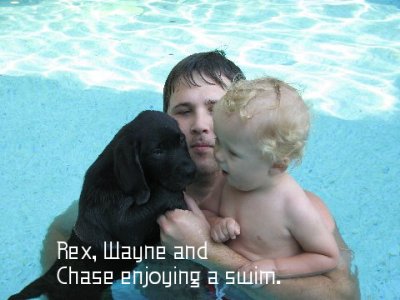 Rex is owned and loved (as you can see) by the Wayne Hopkins family of  Manassas, Virginia

"Here is a picture of us in the pool . He is already starting to retrieve and bring it right back to me . You know how some dogs refuse to bring it all the way to you, well he bringing  it all the way back already.    We love him so much ,  thank you again and I will keep in touch with you guys ."
God Bless,
Wayne & family 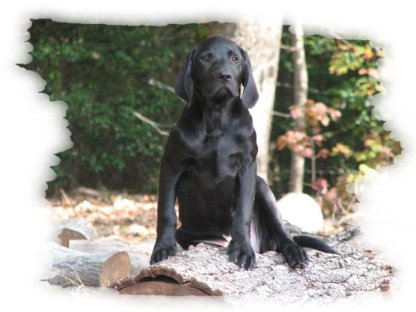 This is Murray owned and loved by the Napalitano family of Greenwood, Pa.  He just loves to rest on her lap, it's so comfy and soft. 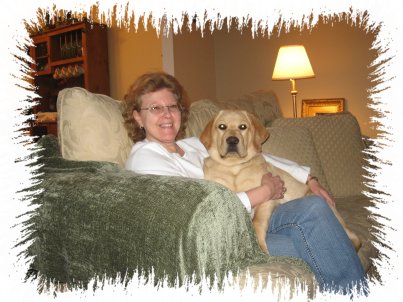 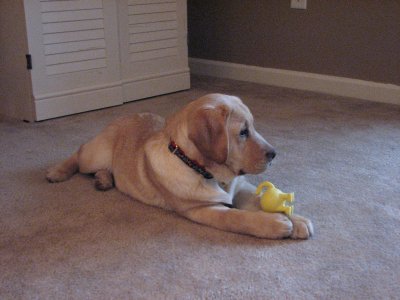 Hello.  I wanted to give you an update on Scout and send you some photos.  Scout has definitely become one of the family.  Allie and he are great buddies.  He is almost housebroken and the crate training has been a breeze.  He is also learning new tricks all the time.  So far, he has mastered come, sit, stay, shake, and roll over.  He loves roll over so much that he will start doing it as soon as he sees a treat in your hand.  Other times he will immediately sit and lift up his paw to do shake.  We took him to the vet on Saturday for his kennel shot and they took one look at him and fell in love (just like we did) and then they took one look at his paperwork and gave you high praise (the vet even made sure her techs saw his papers so that they could see what great papers should look like).  The vet will neuter him right after he turns 6 months.  I will get those papers to you immediately following that. Thanks for such a great experience 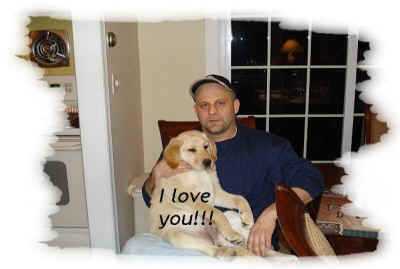 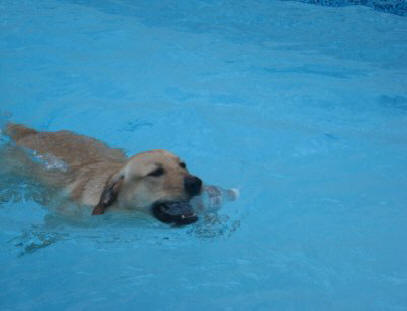 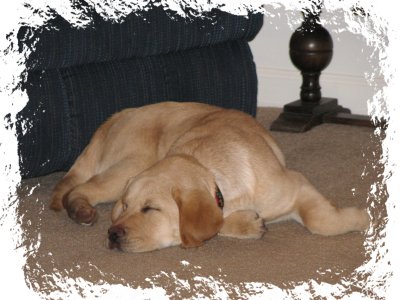 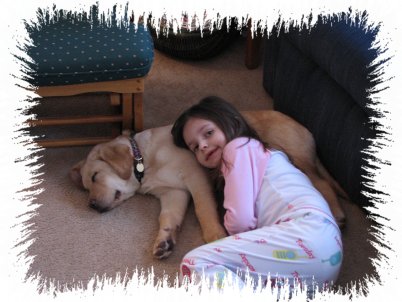 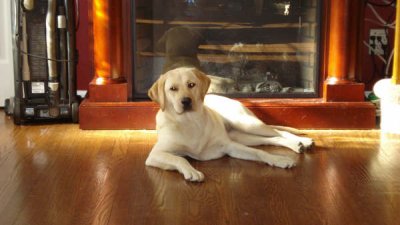 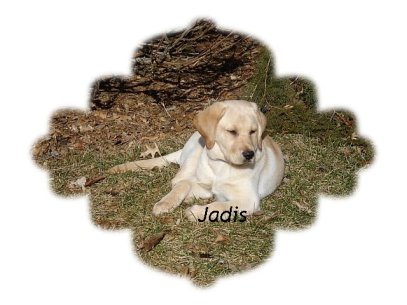 Jadis one year old relaxing at the fireplace. 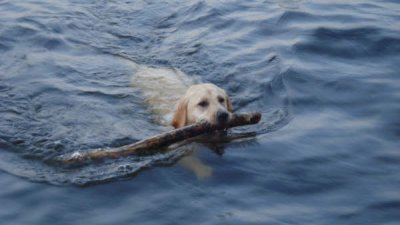 Here is a pic of our little girl swimming at my uncles lake this past weekend.  She is so adorable and we love her so much.  She had such a good time and slept the entire ride home!!! 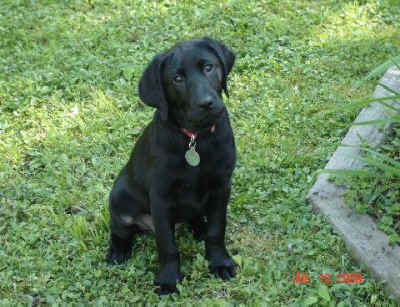 She is an awesome dog and gets along really well with my kids as well as all the others . We really couldn't have asked for a better puppy. She definitely loves to run and play with just about anybody that is willing to play her games. We get so many compliments about how shiny her coat is. It must be the purina one! The vet couldn't believe she was only 3 and a half months because she is getting so big. Well I'll try and keep in touch a little more often and I hope all is well there. Oh by the way her name is Bailee!    Thanks again for the best puppy we could ask for, 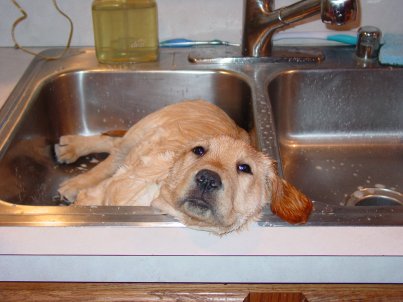 This is Reggie getting a bath in the kitchen sink, looks like he likes it.  He is owned by the Fonda Rowe Family of Lancaster Dairy.

Bettis 8-11-2008 Here are a few pictures of Bettis from the last couple of months. He is growing so fast and is almost 40 lbs as of last week!! Everywhere we go with Bettis people are always stopping us and saying how cute he is. He is a great dog with an excellent temperament is is great with people, other dogs and small children. Lauri and I can't thank you enough for Bettis. We would be lost without him. 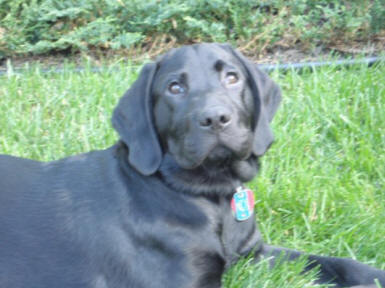 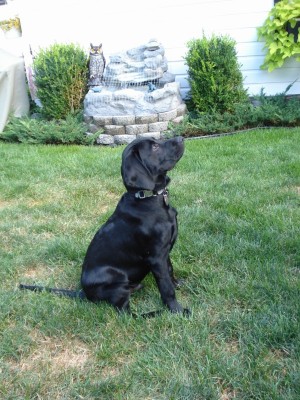 This is Hershey and Maggie's fourth litter, 2008 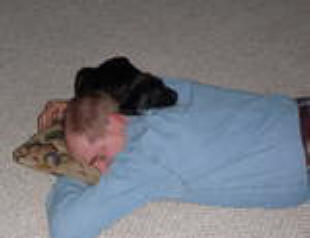 Hello Theresa and Rex; January 2009
I was playing on the living room floor with Sadie, and I fell asleep. Judy came in to see why we were so quiet. And took this picture. Somehow, sometime after I dozed off, Sadie climbed up on my back and dozed off too. It's one of the rare moments when she isn't really busy here!
She's doing well and growing fast. Getting used to the collar and leash when we walk her. Though she's usually free to roam in the hayfield below our pool on long walks with me. 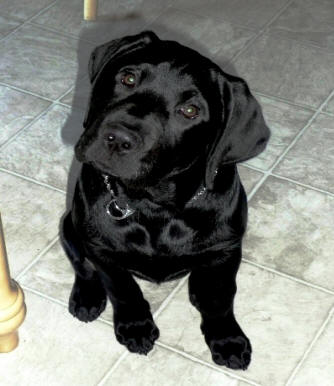 Hi Theresa - I've been wanting to send you a pic of Willie.  We couldn't have asked for a better pup!  He is as sweet, obedient & affectionate as can be.  I have never seen such a calm, laid-back dog.  Everyone he meets is totally smitten with his temperament. Our vet was impressed with both his physical condition and his nature, especially since he fell asleep in the waiting room amidst the general chaos of dogs, cats and people.

Willie seems to be wise beyond his years, almost like an "old soul" in an adorable puppy body.  He loves to sit and observe everything going on around him.  His growth has been amazing; he is over 50 lbs at 4 months! The vet told us he could easily reach 100+ lbs full grown.

Willie is a very quick study.  He knows all his basic commands, including sit, shaking with either paw, lay down, roll over and stay.  He walks well on leash and has been totally housebroken for over a month.  Wiliie loves to ride in the car & goes many places with us, including my mother's nursing home.  He is already a favorite there and also at my office where he makes weekly visits.   Eric has taken him swimming several times at an indoor dog pool and may eventually train him for dock jumping.

This pup has never chewed on anything that wasn't his and has not even barked yet.  What a gem!

Guess I've gushed enough for now, but we love this little guy to pieces.  Thanks so much for being good responsible breeders.  We would recommend your dogs without reservation. 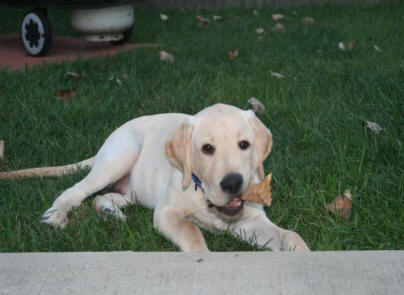 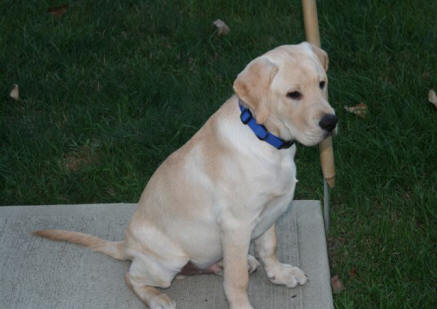 Theresa & Rex,
Just wanted to send a few pictures of Max, he is doing great we just came back from the Vet he weighs more than Leah now(48 lbs). He loves to sit by my side and try to get on the couch, Rex did a good job making him into a couch potato. The vet said he is going to be a big dog because of his head it is very blocky. He loves playing fetch with this big bouncy ball with a handle we got him, and he loves his bones, chews them all the time.
Talk to you soon.
Captain Jeffrey Friedland 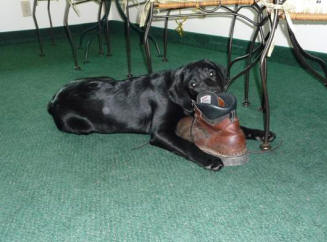 Hello Theresa and Rex;
Thanks for asking about Sadie last Sunday. Sorry it has taken so long to reply. The attached picture is Sadie at 16 weeks, taken yesterday. She is doing so well. And everybody loves her. Of course she wants to go see everybody that walks by or steps outside of their room when she's outside too. So far people have been good with her.
Please stop in to see us sometime.
John and Judy 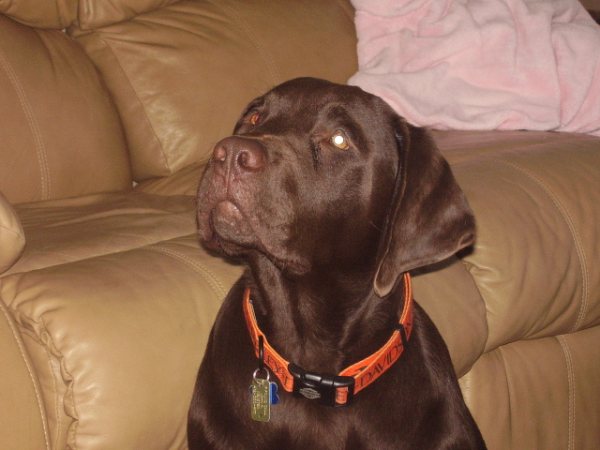 The above photo is Hank and he is a Hershey and Kami puppy 2009.

Hope the Holiday season was a nice one for you too. Did you get the card I sent? We were lucky to get the kids & all of the dogs together because just 5 days before Xmas we had to put our oldest boy (dog), Socks - to rest. He was 16yr old, he lived a really full life w/ us, but it was still hard. I am sure you know that feeling all to well. The kids took it pretty bad, but honestly Hank has kinda been a bit of a "blessing" for us.... he kept us busy & actually helped thru that sad time. The one picture I attached is the last picture we took of Socks. (Hank is sleeping on him!! Kinda makes me wonder if he knew something!) It was taken the night before had to put him down, Hank had to snuggle w/ him!!

The other pictures I attached are of Hank & the kids (even the neighborhood kids) playing out in the snow. (But for some reason, it's really hard to see him. They aren't the best pics but I had to show you how much fun it was) He has so much fun playing in it. We laugh as he leaps his big ole body thru it!!!! And then he will just bury his big brown head in it, when he comes up he's covered & has a big white face!! LOL!!! He is growing soooooo fast & is doing really well. He loves to snuggle up on the couch w/ somebody. He's so funny & we love him so much!!!!


If you are interested in applying for a Klondike Labrador puppy, please fill out our Online Puppy Application, or call Theresa at

A deposit of $200.00 will reserve a pup of your choice. Early reservations are highly recommended.

Prices for our English Labrador puppies starting at $800.00 depending on the pedigree.